Phil 3:12-14 What was it that Paul pressed on to lay hold of, for which also Christ had laid hold of him?  See also Phil 3:11.  Considering the exemplary life Paul lived for Christ, what do his words teach us about attaining absolute perfection in this life?  Did such a realization prevent him from continuing to strive for such?  Note: “press on” in Phil 3:12 and 14 is the same word usually translated “persecute” elsewhere in Scripture, and means to pursue with all diligence or keep up the chase; what does Paul’s use of this word here teach us about the nature of our Christian walk?  Are we as diligent to press on in our walk with the Lord?  What attitude of Paul’s is revealed in Phil 3:13-14 that is exemplary for us in dealing with our shortcomings as Christians?  How is such an attitude necessary for success at anything in life?  Note: “goal” in Phil 3:14 = “mark” (KJV) and refers to the distant mark looked at or the goal or end one has in view; what is the mark upon which we as Christians must keep our eyes firmly focused as we press on?  See Heb 12:1-3.  What does Paul say is the prize to be won?  Note: KJV “high calling” is better translated as in the NASB “upward calling” (see also 2 Tim 1:9, Heb 3:1) and infers that the prize is an eternity of becoming ever more like Christ, which was God’s original intention for man before the fall.  From Paul’s words here do you suppose we shall ever, either now or in eternity, reach the point where we can say we’ve arrived and there is nowhere higher we can go?  Note: consider how the mathematical function f(x) = 1/x describes man’s eternal life as a function of his carnal life: 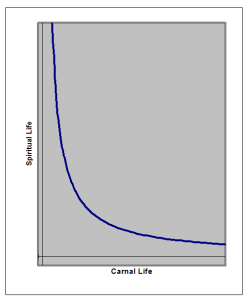 the more he seeks to save that carnal life, the closer he gets to zero which is spiritual death, but the more he dies to his flesh the more he experiences the upward call of God in Christ Jesus.  How is this “inverse” function representative of the nature of God described in Scripture?  See Eze 17:24, Luke 1:52-53, 1 Cor 1:26-29?  Note: it is interesting that f(x) = 1/x  has many special mathematical properties, including that it is its own inverse; the area under its curve is also the natural logarithm, itself an important inverse of the natural exponential that shows up all over in the natural world.

Phil 3:15-16 How does Paul’s use of the word “perfect” in Phil 3:15 differ from his use of it in Phil 3:12?  See NASB text note; see also 1 Cor 2:6, 14:20, Heb 5:14.  What attitude does he refer to that those who are mature in their faith should have?  Regardless of our Christian experience and maturity in the faith, should we ever suppose there is not room for further growth?  What differing attitude did some among the Philippians evidently have?  What problems might such an attitude lead to within a body of believers?  See Phil 3:2:2-5, 4:2.  With what words does Paul gently correct the differing attitude, and how would his words in Phil 3:16 help prevent some of the problems that were stemming from it?  Confer 1 Cor 8:2.  What does Phil 3:16 mean for us in terms of the curve pictured above?

Phil 3:17-21 What example in particular did the Philippians have in Paul that he would have them follow?  See Phil 3:12-14.  Note: “observe” is the verbal form of the word Paul used in Phil 3:14 for goal or mark; what is the importance of having godly examples to follow?  See also 1 Cor 11:1.  Who are those today whom we might follow who walk according to the pattern set by Paul?  Are we ourselves such examples for others to follow, especially for our children?  What is the danger of having no godly examples to follow?  See Phil 3:18-19.  In these verses is Paul referring to complete pagans, or to some who profess to be Christians?  See also Phil 3:2-3.  How do Paul’s words in Phil 3:19 describe many (most?) American Christians today?  Do they describe us?  Contrast the false sons Paul describes in Phil 3:19 with the true sons whom he describes in Phil 3:20.  Note: for “eagerly wait” see also Rom 8:19,23,25, 1 Cor 1:7, Gal 5:5, and Heb 9:28; is our citizenship truly in heaven and are we like Paul eagerly awaiting our Savior and the final redemption of our carnal flesh, or is our mind more set upon earthly things?