Pastorals: The pastoral epistles consist of Paul’s two letters to Timothy and his letter to Titus.  They are grouped together because of similar teaching, similar phrases and other language, and similar time of composition.  They have been termed the “pastoral” epistles because of their pointed instruction to those who would succeed the apostle Paul in his ministry of the gospel of the Lord Jesus Christ.

Background and Purpose: Following Paul’s three missionary journeys the Acts record describes how he was arrested in Jerusalem and eventually sent to Rome pending an appeal to Caesar.  However, at this point the book of Acts ends, leaving us to piece together from other sources the remainder of Paul’s life.  Paul anticipated his release from custody in Philippians 1:19,25, 2:24, and Philemon 1:22 and it is almost certain that he was (cf. King Agrippa’s statement to the governor Festus, “This man could have been set free, if he had not appealed to Caesar”, Acts 26:32).  Because the events described in the pastoral epistles do not fit into the Acts chronology and appear to take place toward the end of the apostle’s life, it is most reasonable to assume that they refer to a time following Paul’s release from prison (c. 62 a.d.).

In anticipating his release from this first Roman imprisonment Paul had requested Philemon (who lived in Colossae, east of Ephesus in Asia) to “prepare me a lodging” (Phlm 1:22) and mentioned his hope that he would “be coming shortly” to the Philippians (in Macedonia, Phil 2:24).  It is therefore likely that following his release he traveled to both Asia and Macedonia.  At some point while in Asia he asked Timothy to “remain on at Ephesus” where he had ministered for 3 years on his third missionary journey while he traveled to Macedonia (1 Tim 1:3).  The “savage wolves” he had warned the Ephesian elders about in Acts 20:29 were beginning to arise and Timothy was to “instruct certain men not to teach strange doctrines” (1 Tim 1:3).  Paul hoped to come to him before long, but in case he was delayed he wrote so that Timothy might “know how one ought to conduct himself in the household of God” (1 Tim 3:14-15).  Although not certain, it is most likely that he wrote from Philippi, c. 63 a.d. 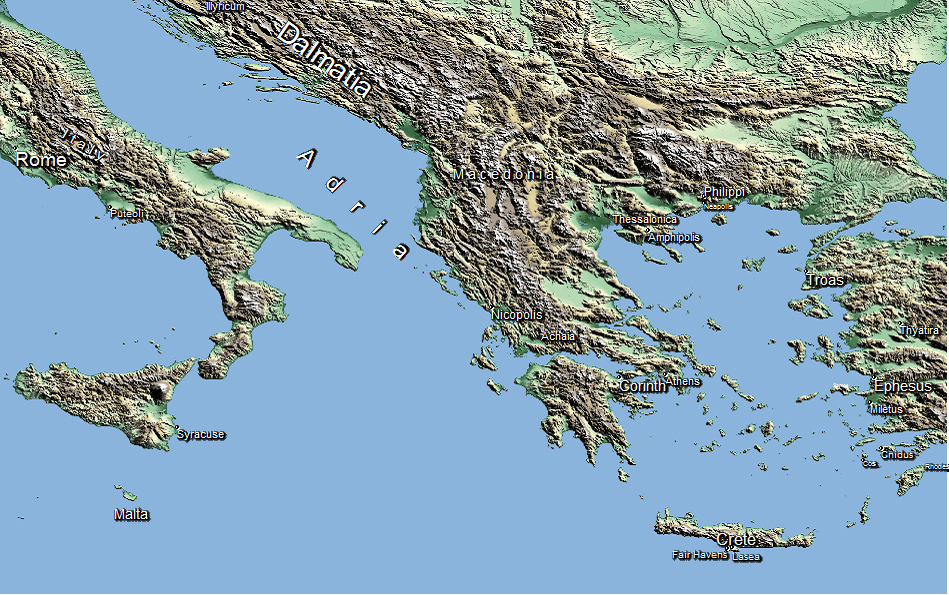 Having served with the apostle for approximately twelve years since his second missionary journey (see Acts 16:1-2) Timothy would already have been well acquainted with the apostle’s teaching.  However, considering that he would be exercising authority over church leaders who were older than himself (1 Tim 4:12, 5:1; Timothy was likely around 30 years old at the time), the letter would provide a written apostolic directive to which he could appeal for his authority.  (Notice that although the letter is addressed specifically to Timothy, the closing greeting in 1 Tim 6:21 is in the plural, indicating it was intended for a wider audience).  As Paul was also now advancing in years (see Phlm 1:9), he was no doubt also giving greater attention to prepare his closest associates for the time they would succeed him in ministry.[1]

From Titus 1:5 it is also clear that at some time following his release Paul ministered on the island of Crete with Titus, who had served with the apostle since before his first missionary journey (Gal 2:1).  He left him there to “set in order what remains, and appoint elders in every city”, while he himself moved on, eventually arriving at Nicopolis (on the northwestern shore of Greece) where he expected Titus to catch up to him.  It would seem from Paul’s choice of words in Tit 3:12 (“there” versus “here”) that he was not in Nicopolis at the time of writing, just headed there, perhaps in Corinth, or perhaps even in Asia[2].  Because of similarities with 1 Timothy, it was most likely composed in the same time frame, c. 63 a.d.

Based upon his stated desire to do so (cf. Rom 15:23-28) and the testimony of Clement only 30 years after Paul’s death, it is also likely that following his first Roman imprisonment Paul engaged himself on a fourth missionary journey to Spain, probably after the writing of 1 Timothy and Titus.  In 64 a.d., a large portion of Rome was destroyed by fire, and many believed the emperor Nero to be responsible because of his grandiose designs for a more beautiful Rome.  To divert attention from himself he instigated the first government sponsored persecution of Christians as scapegoats for the conflagration.  Prior to this time Christians were viewed as a sect of the Jewish religion, which had religio licita status within the empire.  At that time Christianity became a religio illicita and its leaders were sought out for arrest.  Assuming Paul did go to Spain, he must have returned to the west coast of Asia where he left Trophimus sick at Miletus (2 Tim 4:20) and his cloak and important books and parchments at Troas (2 Tim 4:13).  Perhaps it was in Troas where he was arrested and sent to Rome for his second Roman imprisonment.  However, this time he was no longer under house arrest in his own rented quarters, but rather in a cold cell of the Mamertine prison.  From there he wrote what we know as 2 Timothy to encourage Timothy, who was timid in nature, in regard to the growing hardships of following Christ: persecution from without, and false teaching from within.  He was also anxious to have Timothy join him in Rome and bring the cloak and parchments he had left in Troas.  2 Timothy was Paul’s last epistle, written as late as 67 a.d.

Authorship:  Many modern scholars deny that Paul authored the pastoral epistles and base their belief on the following five considerations.  Before enumerating them, let us not be unaware of Satan’s schemes to diminish the authority of God’s word in our lives by assailing its integrity.  Upon inspection, one discovers that such men (or women, as is often the case today) who deny the integrity of the word of God have a purpose for doing so.  And that purpose is ultimately to make it less binding on their lives.  Such people have fallen for the serpent’s age-old temptation to sin that begins by instilling doubt in God’s commands with the words “Did God really say…?”

1)   Linguistics:  Modern scholars argue that Paul could not have authored the pastoral epistles because the vocabulary and style are so different from his other epistles.  However, we note that although there do exist differences in vocabulary and style, such in no way necessitates a different author.  The differences are not so extreme as we would be led to believe and do not take into account the important similarities which argue for Pauline authorship.  We also know that Paul made use of an amanuensis (one who wrote at the dictation of another, cf. Rom 16:22, 1 Cor 16:21, Gal 6:11, Col 4:18, 2 Thess 3:17, Philemon 19) and such agents were often given a fair degree of stylistic freedom.  A different amanuensis, different audience, different time period, and different circumstances are more than enough reason to account for the different vocabulary and style.

2)   Chronological and Historical situation:  Opponents of Pauline authorship argue that since the events described in the pastoral epistles don’t fit into the Acts chronology, they must be falsely ascribed to Paul.  However, such arguments exclude the most logical consideration that they refer to a time after the Acts record ends.

3)   Ecclesiastical Situation:  Opponents say that the church structure described in the pastoral epistles was too well developed for the end of Paul’s life.  But such arguments are based upon the evolutionary presuppositions of the 19th century and do not consider other New Testament references which demonstrate the same developed church structure by the same time period (cf. Acts 14:23, 1 Pet 5:1-4).

4)   Theological Considerations:  Opponents argue that the books fit better in a setting of second century Gnosticism.  But this doesn’t take into account that the seeds of Gnosticism were already present in Paul’s day.

5)   Doctrinal Differences:  Lastly, opponents argue that most of the major Pauline themes from his other epistles are missing from the Pastorals.  But this doesn’t observe that Paul was writing to his close associates who were already well versed in his doctrines.

From the above arguments we see that if men have in mind to reject God’s word, they can and will argue however they wish to support their conclusions.

1. Consider that Paul never “retired” from ministry.  Nor did he leave it up to the churches he had planted to make do the best they could after he was gone, perhaps forming a search committee to look for another spiritual leader.  He understood from the very beginning of his ministry the nature of the battle he fought and how high were the stakes, and so sought out “faithful men” whom he could teach and who would be able to teach others also (2 Tim 2:2).  Timothy and Titus were among these faithful men, perhaps even foremost among them, and it is not surprising that toward the end of his life Paul would focus his attention on these who would carry on the ministry of the Lord Jesus Christ.↩

2. In Tit 3:12 he mentions sending to Titus either Artemas, a name honoring the Greek god Artemis whose magnificent temple was in Ephesus of Asia (Acts 19:35), or Tychicus, who was from Asia (Acts 20:4).↩

Young people in Britain order more medicaments per person than any other area. The availability of medications provided by companies is no doubt a contributing aspect to prescription drug abuse epidemic. Some medicines are commonly used to treat various types of bacteria, such as gonorrhea and infections of the throat. No doubts, you have to check with your health care provider to see whether one of these medicaments is a right choice for you. Learn more about “cialis daily dosage“. What should I discuss with a sex therapist before buying Cialis? This article tell more about the signs of erectile malfunction and “”. More information about Cialis available at “”. Why it happen? Can sexual problems in men be prevented? You discuss it with regular doctor if you are thought to take Cialis. Or you can ask a specialist. Psychologists can especially help when the cause of the dysfunction is psychogenic. Either one can prescribe the medication if they resolve it’s assign for you.