Mat 8:28-34  Locate the region Gadara (south and east side of the Sea of Galilee) on a Bible map and read the longer account of this episode in Mar 5:1-20.  Note that the region of the Gerasenes that Mark and Luke describe (Luk 8:26-39) may more precisely locate the area around the small city of Gergesa, 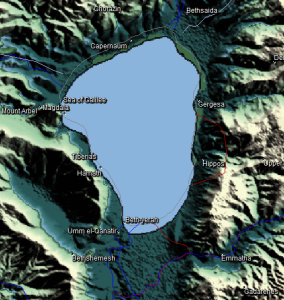 which was located in the larger region of Gadara which would be better known to people not familiar with the smaller areas around Galilee.  Why might Mark and Luke’s account refer to only one demon-possessed man while Matthew records that there were two?  Cf. Luk 8:27 which indicates that the one mentioned by Mark and Luke stood out particularly as a “man from the city” who may at one time have been of some prominence.  What does Mark’s description of the man teach us about the supernatural strength of those possessed by demons?  Consider how the “mentally ill” are today often restrained using a straight jacket.  What is the significance that the man had his dwelling among the tombs?  What does the demon’s name (Mar 5:9) teach us about the potential for one to be possessed by more than one demon?  See also Mat 12:43-45.  How many are in a legion?[1]  See also Mar 5:13.  What does this indicate about the man’s hopeless plight? 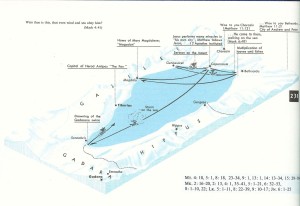 What does it teach us about the incredible authority of Jesus to single-handedly dispatch thousands of demons with just a word (Mat 8:32)?  Who did the demons immediately recognize Jesus as?  See also Mar 5:6-7.  What does the demons’ recognition of who Jesus was teach us about the clarity of perception in the spiritual realm, even among the degraded, and how does that contrast with this present realm?  See Luk 12:2-3; cf. Mat 24:4, 1Jo 3:7.  What was the demons’ great fear from Jesus?  See Mat 8:29; cf. Mar 5:7,10, Luk 8:28,31.  Do we have as much fear of God as the demons?  Cf. Jam 2:19.  What is the “abyss”, and what “time” did the demons refer to in Mat 8:29?  Cf. Rom 10:7, 2Pe 2:4,9, Jud 1:6, Rev 9:1-11, 20:1-3.  Why is it significant that Jesus allowed the demons to enter the herd of swine instead of commanding them to “depart into the abyss”?  Think: who do swine represent in Scripture?  See Mat 7:6, 2Pe 2:18-22.  What happened to the swine after the demons entered them?  How is this a parable of how those who turn back and fall away from following Christ drown in the waters of the world?  Note that the word Mark uses in Mar 5:13 is the same word Matthew uses in Mat 13:7 for the thorns that choked the seeds that had been sown; consider how we use the same expression today for someone who fails at what would otherwise be a sure thing: they choked.  What did the herdsmen who kept the pigs do?  See Mat 8:33.  What was the response of the townspeople when they came out and found the demoniac “clothed and in his right mind”?  See Mar 5:15, Luk 8:37.  Was Jesus more concerned about the loss of thousands of pigs, or the men’s deliverance?  How is the response of the townspeople typical of so many in a worldly church who would rather have profit from thousands of pigs than the complete deliverance and true salvation of one lost soul?  What was the response of the man who was delivered, and how was it indicative of the true salvation he had experienced?  See Luk 8:38.  Are we as desirous to follow the Lord and proclaim how He has delivered us?  What is the significance to Matthew’s purpose that the country of the Gadarenes was a Gentile region (Mar 5:19-20) and the demon possessed man was a Gentile?  What insight does this give us as to why Jesus wouldn’t allow him to return with Him?  Considering Matthew’s Jewish audience at a time when so many of the Jews were rejecting Jesus as their Messiah because the Gospel had gone forth to the Gentiles and so many of them were believing it, why do you suppose Matthew ended his description of this episode with the people entreating Him “to depart from their region” and does not mention the evangelistic zeal of the man Jesus delivered?