Following Jesus’ visit to His hometown (Mat 13:53-58, Mar 6:1-6a) what does Mark say He and the twelve did?  See Mar 6:6b-7,12-13.  What was the result of this ministry tour?  See Mar 6:14a, Luk 9:1-7.  What does Mar 6:14-29, Luk 9:7-10a, and Mat 14:10-13 indicate about the approximate time in relation to these other events when John the Baptist was put to death?  Where does Luke indicate that the “lonely place” was to which He withdrew by boat after hearing the news of John’s death?  See Luk 9:10.  For what additional reason does Mark add that Jesus withdrew with His disciples to be by themselves?  See Mar 6:30-32.  What did the crowds who were following Jesus do when He withdrew with His disciples?  See Mat 14:13b, Mar 6:33, Luk 9:11.  Locate on a Bible map Bethsaida; what other important Biblical city was near enough to Bethsaida for people to follow Him on foot?  What does this indicate about where they likely concluded their ministry tour, and why is that not surprising?  Cf. Mat 4:13, Mar 1:21,29; see also Joh 6:1 and observe on a Bible map how Bethsaida is on “the other side of the Sea of Galilee” from Capernaum.  In light of the description of the place where they were as “lonely” and “desolate” (Mat 14:13,15) is it likely that they were actually in the city of Bethsaida or just in that vicinity?  Why is it significant that the area of Bethsaida is on the other side of the Jordan in Philip’s kingdom, and hence out of the ruling jurisdiction of Antipas?  Cf. again Mat 14:10-13. 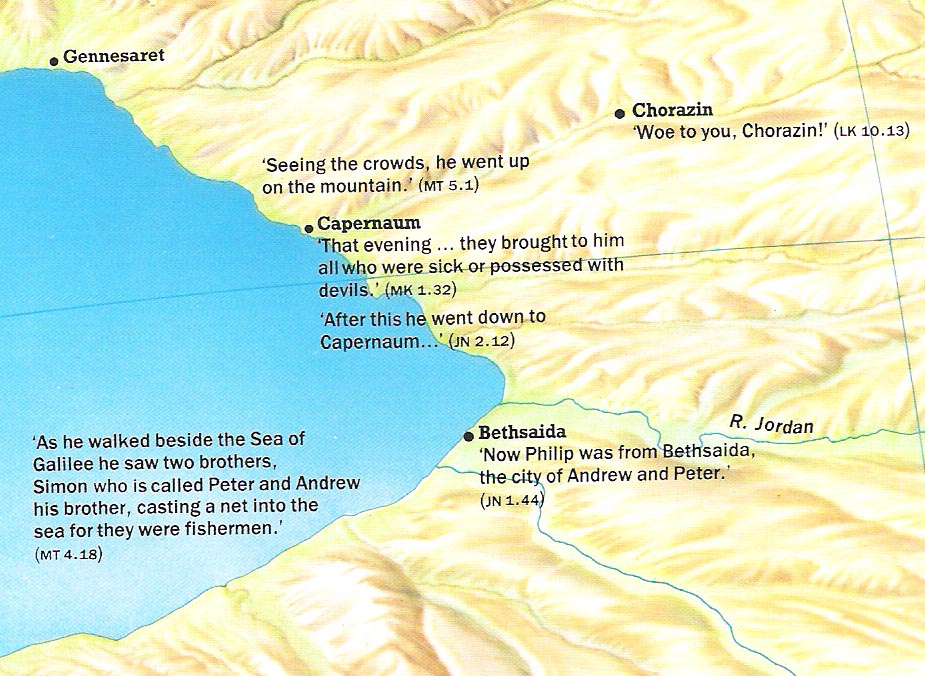 How was Jesus’ attitude towards the crowds that followed Him very different from what most of ours would likely have been after withdrawing to be by themselves?  See Mat 14:14, 6:34, Luk 9:11.

At what time of year was it?  See Joh 6:4.  What would this seem to indicate about Jesus’ attendance in Jerusalem at that Passover?  Cf. the context that follows in Matthew, Mark and John that also seems to indicate that He made no trip to Jerusalem at this time.  Why would He as the Jewish Messiah have avoided Jerusalem?  See Joh 7:1,6,8, and recall Mat 14:10-12.  Why would the miracle of the multiplied loaves and fishes in the desolate place they had retired to have been all the more significant during that time of remembrance of the nation’s exodus from Egypt?  See Exo 16:1-8,13-15.

As the day was declining (Luk 9:12) and it was already quite late (Mar 6:35), what did the disciples counsel Jesus He should do so that the multitudes who had followed Him could obtain food?  See Mat 14:15, Luk 9:12.  Did they have any expectation that they should provide food for the crowd that had come to Jesus?  How did He answer them, and what does His response indicate about how His expectation was different from theirs?  See Mat 14:16, Mar 6:37, Luk 9:13.  What does this teach us about the obligation God feels to provide, even miraculously as needed, for those who are willing to follow Him away from the world to a desolate place where they can be at rest and hear His voice?  Cf. Mat 6:33.  Do you think God will provide for us in the same way?  What does the fact that such a great multitude traveled to a desolate place for the day without thought for food indicate about their preoccupation with food as compared to ours today?  Is it possible that our preoccupation with the material things of this world is what prevents us from following Him to a place of solitude to be taught by Him and where we can eat of the bread He provides?