Mat 15:29        From where had Jesus just departed?  See Mat 15:21.  Where in particular around the sea of Galilee does Mark say that Jesus departed to?  See Mar 7:31.  Where was the region of Decapolis in relation to Galilee that was ruled by Herod Antipas, and to Iturea and Trachonitis (Luk 3:1) that was ruled by his brother Philip?  See Bible Maps below and note that the region of Decapolis was east of the Jordan, and the cities of Hippos and Gadara in this region near the Sea of Galilee belonged to the Decapolis.  What was the Decapolis and how was it ruled?  Note: the Decapolis was a federation of Greek cities, originally ten but then more, that were autonomous from the Tetrarchies of Herod’s kingdom.  What is the significance that, like the region of Tyre and Sidon, this was a Gentile region?  For what reason did He seem to be avoiding the Jewish regions ruled by the Herods?  Cf. Mat 12:2, 14:1,10, 15:1,21.  Did He have reason to fear that the outwardly religious but carnal-minded Pharisees would collaborate with the secular authorities for the sake of expedience to silence His message of truth?  Cf. Joh 11:47-50, 12:42-43.  Do we have need to fear the same from many so-called Christians today?  Why is that?  See 2Co 11:14-15. 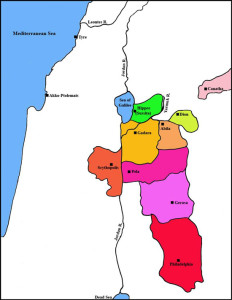 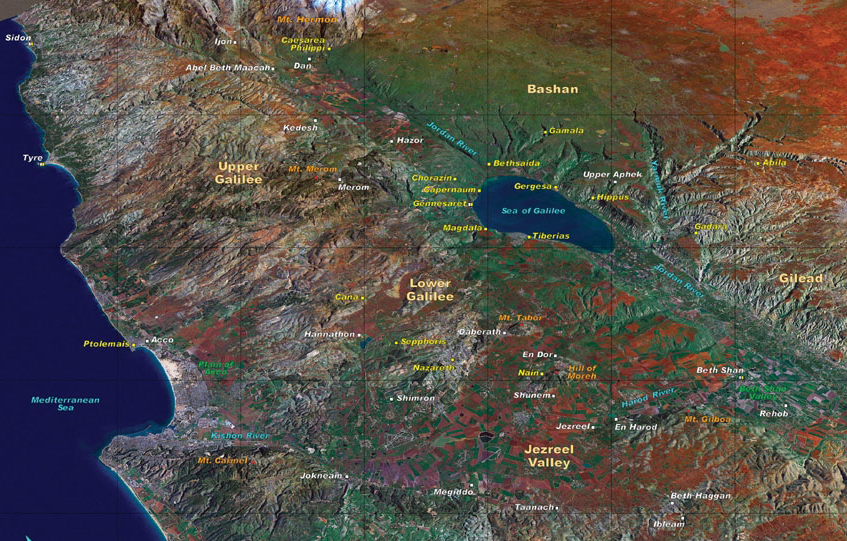 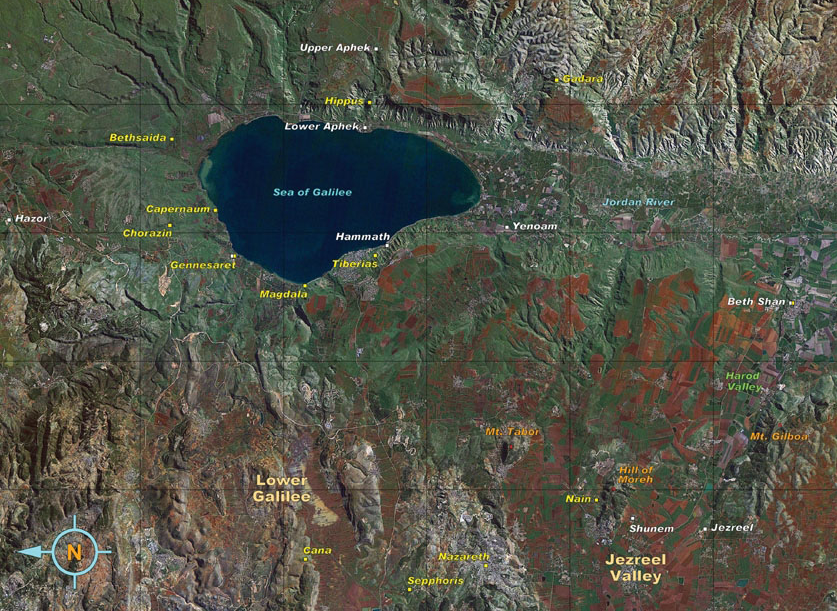 Mat 15:30-31  Besides the fact that they were in the region of Decapolis, what indication do we have that the multitudes described here who were coming to Him for healing were in large part Gentiles?  See Mat 15:31.  How would so many Gentiles have already known about Him so as to bring to Him those in need of healing?  See Mar 5:20.  What is the difference between being “lame” and being “crippled”?  See Act 3:2, 14:8, Heb 12:13; Mar 9:43.  What does this teach us about what it means that the crippled were “restored” (lit. made whole, sound)?  What particular incidence of healing does Mark emphasize in his gospel that occurred at this time?  See Mar 7:32.  What did those who brought the deaf and mute man to Jesus entreat Him to do in order that the man might be healed?  Was that what He did?  What does this teach us about how the manner in which God answers our prayers may be different from our expectations?  For what reason did Jesus take the man aside from the multitude by himself?  See Mar 7:36.  What several things did Jesus do to effect the man’s healing?  See Mar 7:33-34.  Is there any significance to Jesus putting His fingers in the man’s ears?  What could it be?  Consider that since the man was deaf he could not hear anything Jesus was saying, and cf. Rom 10:17, Deut 9:10, Mat 12:28, Luk 11:20, 2Co 3:3.  Apart from this context, what does the act of spitting upon someone typically communicate?  See Lev 15:8, Deut 25:9, Mar 10:34, 14:65.  In what sense is using vulgar language, especially in contempt of another person, akin to spitting upon them?  Think: in what sense are both unclean things from our mouths?  Consider that spitting was at one time in the early church part of the rite of baptism to renounce and express contempt for the devil and his ways.  Is there a sense in which spitting upon another is purgative?  Cf. Num 12:10-14.  In this light, what might we understand to be the significance of Jesus spitting and touching the man’s tongue with the saliva?  Cf. Mar 8:23, Joh 9:6, and note too that “saliva was by some regarded as remedial and was used by exorcists in their incantations”; “the curative effects of saliva are held in many places” (Robertson’s Word Pictures), especially the spittle of one who was fasting (McClintock and Strong).  If even that which we would consider to be unclean but comes from the mouth of God is curative and redemptive, how ought we to view that which is clean and pure and holy that comes forth from His mouth?  See Psa 107:17-20.  What is the connotation of the “deep sigh” Jesus made while looking up to heaven?  See Rom 8:23, 2Co 5:2,4, Heb 13:17, Jam 5:9 for the only other NT occurrences of this word.  How does Mark describe the speech impediment of the man, and what does the language he uses indicate about his understanding of the nature of the affliction?  See NAS text notes on Mar 7:35 and cf. KJV “the string (lit. bond, fetter) of his tongue was loosed”; see also Mar 9:17,25, Mat 9:32-33, 12:22.  Why did He give orders not to tell anyone?  Think: the Jewish leaders were already offended by Him and His ministry; what would their reaction have been if they knew He was also ministering to the Gentiles?  Is it significant that Matthew in His gospel to the Jews speaks only in general terms (see again Mat 15:30-31) and does not mention this event specifically or that these healings took place in the Decapolis?  What was the response of the multitude to His healings?  See Mat 15:31, Mar 7:37.