Was it necessarily the literal fathers of the scribes and Pharisees who had persecuted and put to death God’s prophets in times past?  I.e., were the scribes and Pharisees necessarily their literal descendants, or was it more the case that because the spirit that worked in them was the same spirit that worked in those whom they admitted were guilty of shedding the blood of the prophets, that they were their spiritual progeny?  See Mat 23:31,33 and think: what sort of “brood” were they, and what does that indicate about who their real father is?  See Joh 8:33-44; cf. Rom 9:6-8, Gal 4:28-29.  What do these things remind us about which is more important: our physical or spiritual ancestry?  See Gal 3:7, Rom 2:28-29; cf. Mat 12:46-50.

Do those who are truly righteous need to make a pretend show of honor to those who were righteous in the past by building their monuments in order to appear righteous themselves?  In what way do those who are truly righteous actually appear righteous and demonstrate their love and honor for those who were righteous before them, and that they are their true sons?  See Mat 25:34-40, Joh 8:39, 14:15.  Instead of illustrating their piety, in what way was building elaborate tombs for the prophets and adorning the monuments of the righteous actually the crowning mitre of the scribes’ and Pharisees’ hypocrisy that would testify against them, and that made it appropriate as the object of Jesus’ final pronouncement of woe upon them?  Think: by building the tombs of the prophets and claiming they would not have been partners with their fathers, they acknowledged the righteousness of the prophets, and the wickedness of their father’s actions—which actions they themselves were repeating even more wickedly by persecuting Jesus, who is worthy of immeasurably greater honor than the prophets; see Heb 1:1-2, 3:3 and cf. Mat 21:37.  In what similar way will the honor that ecclesiastical religion has paid to past saints while persecuting reformers who spoke out against its worldliness testify against its adherents in the day of judgment as the crowning mitre of their hypocrisy?[1] In what way are the vestal mitres of such ecclesiastical religion an appropriate type?  Think: can we imagine Jesus or His apostles glorifying their own heads in such a way as to parade their authority?  Contrast Mat 20:25-28, 2Co 10:7, 10:18-11:21, 11:30, 12:9-10. 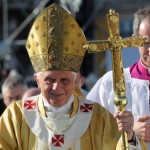 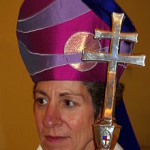 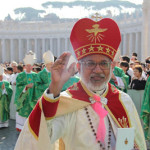 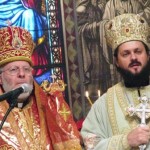 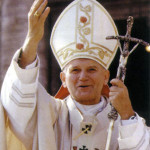 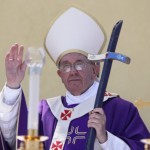 Consider then the enormity of their hypocrisy that would testify against the scribes and Pharisees in the day of judgment: although they acknowledged the righteousness of God’s prophets and the wickedness of their fathers for persecuting them to death, they justified themselves doing the same to Jesus; what does the crowning woe Jesus pronounces upon the religious leaders remind us about those whom God shall reckon above all others as the most guilty?  See Rom 1:32-2:2 and note[2].  Consider too that these who were self-righteous above all others firmly believed that they were just before God in their dealings and in their form of godliness smugly supposed that in the day of judgment they would have no problem giving an account of themselves in order to be justified; cf. Mat 7:22, 22:11.  And yet because their religious cant which gave them such confidence was at odds with their actual lives, their espousal of religion that they thought would save them actually testified against them; what warning does this offer many Christians today for how their own justifications for sin may stand up in the day of judgment in spite of their religious profession?  Will the Lord have any lack of evidence from their own mouths for condemning hypocrites for their sins?  See Mat 23:31 and cf. Psa 59:12, 64:8, Pro 12:13, Luk 19:22.  Indeed, will not their religious profession be their greatest condemnation?  How does this help us to better understand Jesus’ words to the religious leaders in Mat 21:31 that the tax-collectors and prostitutes would get into the kingdom of God before them?

1. The extravagant respect which the church of Rome pays to the memory of saints departed, especially the martyrs, dedicating days and places to their names, enshrining their relics, praying to them, and offering to their images, while they make themselves drunk with the blood of the saints of their own day, is a manifest proof that they not only succeed, but exceed, the scribes and Pharisees in a counterfeit hypocritical religion, which builds the prophets’ tombs, but hates the prophets’ doctrine.  Matthew Henry.↩

2. They who condemn sin in others, and yet allow the same or worse in themselves, are of all others most inexcusable… Such self-contradictions now will amount to self-condemnations in the great day. Matthew Henry.↩