Recall that in response to their request Jesus has just provided His disciples a key sign by which they will know to escape the destruction that will overtake His enemies when He comes in judgment to establish His promised kingdom.  This sign was “the abomination of desolation standing where it should not be” (Mar 13:14)—that is, “in the holy place” (Mat 24:15).  That desolating abomination is much more than a physical idol set up in a physical temple, but the spiritual idols set up by the god of this age in the hearts of those who claim to be the people of God so as to prostitute themselves with the world and defile the true temple of God wherein He dwells; see 2Th 2:1-4,7; cf. 2Co 6:16, Eph 5:5, Col 3:5.  Long before physical Jerusalem was surrounded by the armies of Rome (Luk 21:20) that portended her physical destruction, spiritual Jerusalem was surrounded by the spiritual armies of the powers of darkness to whom she had been given over for her sins (contrast 2Ki 6:15-17).  For she had already been left spiritually desolate when she rejected the Spirit of Christ and He forsook the temple (Mat 23:37-38), and it was only a matter of time before that manifested itself in her physical desolation. 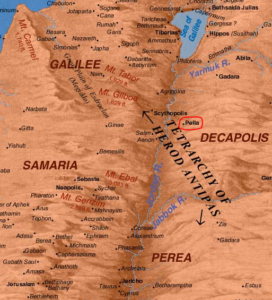 What then did Jesus say His disciples should do to preserve their lives when they saw this sign?  See Mat 24:16.  While Jesus’ words would certainly apply to those in the city of Jerusalem (cf. Luk 21:20-21), what is the significance that He says those who were in Judea should flee?  Think: in the ensuing destruction of the Jewish nation that had rejected Him would they be safe anywhere in Judea?  Note too that before the destruction of Jerusalem in 70 A.D. the Romans had already completely destroyed and /or subjugated the rest of the cities of Judea; Christians from Jerusalem and Judea fled in 66 A.D. to the mountains across the Jordan and settled in Pella, one of the cities of the Decapolis in Perea.  What do Jesus’ words here also indicate about the abomination of desolation being something more than an idol set up in the temple in Jerusalem?  Think: How would those throughout Judea “see” such an idol when Jesus commands that they should not enter the city (Luk 21:21)?

In what way is Jesus’ command in Mat 24:16 and its context of harlot and worldly religion (cf. Mat 23, 21:13) similar to that of the voice from heaven in Rev 18:4 and its context of Rev 17:5-6, 18:1-8?  Cf. also Jer 50:6-8, 51:6-9,45,50.  In what way is it similar to the angels’ command to Lot to flee from Sodom (Gen 19:12-13,15,17), and the command of the Lord through Moses to depart from the tents of Korah so as to not be swept away in their sin (Num 16:24-26)?  Notice that the basic image of the Hebrew word translated as swept away in these passages is “that of sweeping—both the process of heaping things together and of sweeping them away” (Theological Wordbook of the Old Testament), and consider how this image describes the manner in which the enemies of Christ’s kingdom were gathered together into Jerusalem and utterly destroyed in 70 A.D.; cf. 2Ki 10:16-28, Rev 16:12-16.  Is it possible that in addition to a physical location like Jerusalem such a gathering together could also be to a spiritual location, like it was in the days of Noah before the flood came and took them all away?  Cf. Mat 24:37-41, Gen 6:5, Rev 11:8, 16:19,17:18, 18:10,16,18,19,21.  What do these things teach us about the importance of having spiritual eyes to see the abomination that causes desolation, and heeding Christ’s command to flee, and especially fleeing from the supposed safety of that location, whether physical or spiritual, where the masses on the broad road to destruction go but in fact are being gathered for destruction?  Cf. Mat 16:25, Jer 21:8-10.