Contrary to the expectations for how many believed the Christ would appear here or there to provide a worldly salvation from their enemies, Jesus has warned His disciples not to go after them, for like lightning that comes from the east and flashes even to the west, His coming will be very obvious so as not to be missed by anyone.  Also like lightning, His coming will be with irresistible and irrevocable power so that it cannot be withstood, turned back, or undone.  Consider also our modern understanding of lightning here and think: 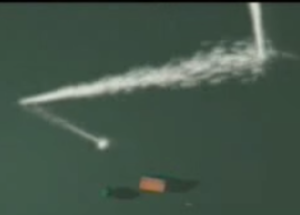 in what ways were the seemingly chaotic events that would take place over the next 40 years that culminated in the destruction of Jerusalem and the temple like the chaotic, branching path of electrons that culminate in a lightning strike?  How does this image also help us to better understand Jesus’ words in Mat 24:40-41, and the nature of His coming in judgment?  Consider too that the Jewish nation’s rejection of Christ by her leaders seemed insignificant and inconsequential in comparison 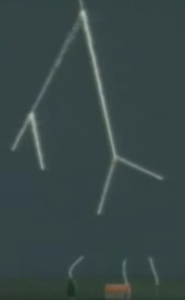 to the great storm of God’s wrath that had already been gathering in the form of their Roman oppressors for their disobedience as His people: it was just a tiny spark high in those clouds and 40 years removed from its end, but it culminated in the “lightning strike” of the Roman armies that destroyed both Jerusalem and the temple; is it possible that the Lord’s arrows or His flashing sword may also manifest themselves in other ways as well, such as in cancer or other diseases, wars, or even various “random” acts of violence, accidents, and “natural” disasters?  Because we don’t often see God’s judgment manifested as immediately as a destructive bolt of lightning from heaven, does that mean that a bolt of lightning hasn’t been unleashed that in time, even 40 years time, may still strike, 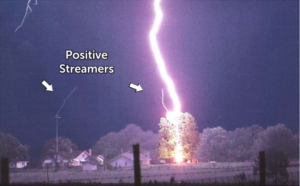 especially if a person or people does not repent but continues in sin so as to attract that lightning bolt like a magnet?  Consider, for example, that it may take many years for cancer or some other disease to develop to the point where it is detected or becomes debilitating: While its onset can be accelerated by various influences, it may also be averted during that time by a change in diet or lifestyle that alters the environmental factors that were allowing it to advance, so that, as with a lightning strike, the person is spared perhaps before they even knew the great danger they were in.  What does this remind us about the importance of never clinging to our sins but walking daily with the Lord with a repentant heart and pursuing the goal of His commandment, which is love from a pure heart, a good conscience, and a sincere faith (1Ti 1:5)?

In spite of the many warnings from God’s prophets, “the signs of the times”, and however long it may take for the lightning bolts of God’s wrath to hit their target, what do Jesus’ words in Mat 24:27 also indicate about how suddenly and seemingly without warning His coming will be to those who give no heed to their souls and are swept away to destruction, and how that contrasts with true Christ-followers?  Cf. Mat 24:36-44, 1Th 5:1-9.  Is God at a loss for ways that His wrath can be manifested, whether it be an earthquake, a tsunami, a super-volcano, a conquering army, a plague of sickness or disease, a reckless driver, an airborne cast iron cover from an exploding manhole, or even a bolt of lightning?  Cf. Deut 32:35.  What does this again remind us about our need to fear the Lord and give heed to His commandments in our daily walk with Him?

Read Luk 17:20-37 which summarizes the understanding of Christ’s coming that we have been coming to.  What question did His disciples ask in Luk 17:37?  What does His answer again indicate about the nature of His coming not being to whisk worldly Christians to a carnal heaven, but “to gather out of His kingdom all stumbling blocks, and those who commit lawlessness” (Mat 13:41)?  Cf. Mat 24:28.  What does the immediately preceding context in Luk 17:34-36, and “wherever” in Mat 24:28 indicate about His coming, like lightning, not being limited to a single place or circumstance?  What does Jesus mean by a “corpse” in Mat 24:28?  Is He referring only to that which is physically dead?  Cf. Mat 8:22, Rev 3:1-3 and notice that the word used for corpse is literally “that which is fallen”.  What does this teach us about how those who have fallen into unrepentant sin are like a stinking corpse in God’s sight that are attracting the birds of prey even as positive electron streamers from a location attract a bolt of lightning?  Consider also that birds of prey are also a type of the powers of darkness; cf. Rev 19:17-18,21.  In regard to His coming in 70 a.d., what was the “corpse” to which the vultures were gathered?  What is the significance that the word for vulture is also the word for eagle (see NAS text note)?  See Deut 28:49, Jer 4:13, Lam 4:19, Hos 8:1, Hab 1:8, and observe that like the United States today, the eagle was an emblem of the Romans.