Following Jesus’ last Passover with His disciples He proceeded as was His custom to the Mount of Olives where they would spend the night (Luk 22:39, cf. Luk 21:37, Joh 8:1).  Along the way, He predicted that they would all fall away from Him that very night, to which they all, and especially Peter, affirmed they would not (Mat 26:31-35).  John records many other things of a much deeper, spiritual nature that Jesus spoke in the upper room and on the way to the Mount of Olives, which only he towards the end of his life seems to have come to understand to be able to articulate in our last gospel.  One other thing, though, that did get communicated through Luke was Jesus’ words about how their future ministry would change and become more difficult from what they had earlier experienced as they, like He, would be branded as malefactors (Luk 22:35-38). 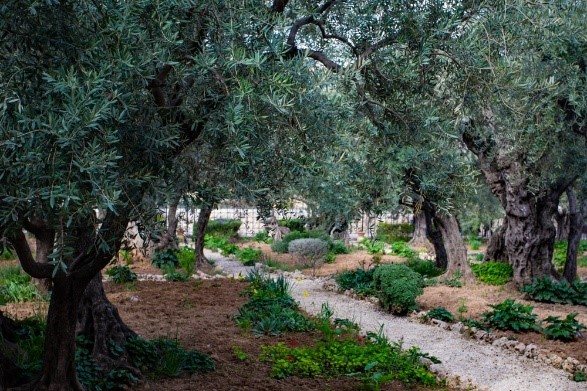 Having now arrived at their destination, how does John describe the location where they would spend the night on the Mount of Olives, and how is it that Judas knew where they would be so as to lead the soldiers and authorities to arrest Jesus?  See Joh 18:1-2.  What do Matthew and Mark record was the name of the garden?  See Mat 26:36, Mar 14:32.  What does the name of the garden mean, that gives us an indication of what sort of garden it was?  Note: Gethsemane is from the Hebrew words גַּת (gath) press, and שֶׁ֖מֶן  (shemen) oil, i.e., an olive press; hence the garden was likely an olive orchard that was prominent for having a press to process the oil from it, and perhaps from other orchards on the Mount of Olives.  To this day in the location thought to be the Garden of Gethsemane there exist very old olive trees that may date back even to the first century.

Considering the spiritual agony that Jesus would experience in the garden as He prayed, why is the name of the garden as an olive press so significant?  See Joh 16:7 and think: in what way did the oil of God’s Holy Spirit flow from Jesus as He was pressed by the agonies He was about to experience?  See Mat 26:39,42,44, Rev 2:10, 12:11.  See also Zec 4:1-14 and note that the lampstand there represents the people of God who give spiritual light to the world, and the two olive branches were Zerubbabel the ruler of God’s people and Joshua the high priest, whom God was using to rebuild the temple, and who typify Christ as both king and priest.  As the foundation they laid was small but eventually grew to become the magnificent temple of Herod in Jesus’ day, so would the spiritual temple that Jesus built to give light to the world begin small but come to fill the whole world (Mat 13:31-32) as the oil of His Holy Spirit would raise up weak and foolish vessels to confound the wisdom of the wise (1Co 1:18,21,27-28,30).  Cf. Zec 3:8-10, Hag 2:3-5,9, and notice that anointed ones in Zec 4:14 is literally sons of fresh oil; cf. Luk 5:37-39.  What does Jesus’ suffering unto death that precipitated the outpouring of His Holy Spirit and victory through weakness again remind us about the very different way the kingdom of God grows compared to the kingdoms of this world?  See Zec 4:6, 2Co 12:9-10.  What does it teach us about the nature of the oil of the Holy Spirit that was pressed out of Jesus through His sufferings, and what it means to be led by that Spirit to find true salvation as sons of God?  Cf. Rom 8:12-14.  What does it also remind us about the nature of the true salvation He came to give to mankind, and the only way that one is able to take hold of that salvation?  See Luk 9:23-24, Joh 12:24-26.