Although Judas’ betrayal of the Lord for worldly gain was a great and grievous sin, there is good evidence that he was deceived and even supposed he was helping to establish the sort of kingdom all of the disciples were imagining in the existing climate of Roman rule and oppression.  Unable to see any victory through death, he couldn’t imagine that Jesus would allow Himself to really be crucified, and by forcing a confrontation with the religious leaders he seems to have believed that Jesus would manifest His power and establish His rule.  But now, seeing that he was badly mistaken, and that he could not undo his deed himself, he committed an arguably greater sin by not looking in faith to God to somehow undo his deed, and despaired of His mercy and forgiveness to take his own life, forevermore preventing the repentance unto life through which one receives forgiveness for sins; cf. Luk 24:47, 2Co 5:10, Heb 9:27; see also Mat 26:73-75, Act 7:58, 9:1, 1Co 15:9-10, 1Ti 1:13,15 for both Peter’s and Paul’s example.  Having cast away into the temple sanctuary the money that burned his soul to death, it now became a quandary for the chief priests over what to do with it.  They couldn’t lawfully put it into the temple treasury, for in taking the blood money to betray Jesus Judas prostituted himself with them against Jesus and so it was like the hire of a harlot (Deut 23:18).  But neither could they receive it back since to do so would be to accept the responsi 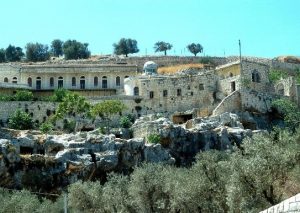 bility for Jesus’ death that they had pinned on Judas.  In what they perhaps imagined was an answer to their prayers, it appears that in the investigation of Judas’ suicide they discovered that he was in the process of purchasing the field where he had hung himself with the money he had obtained, so they simply completed the sale in his name.  Further, since Judas’ body was not discovered for some time and the land was defiled by the gruesome end of his decomposing corpse (Act 1:18), it became a burial place for strangers, i.e., for foreigners to the city who died while there and had no other family plot to be 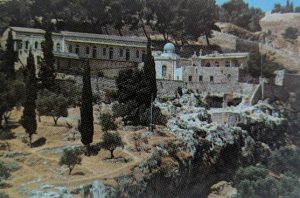 buried in.  As a consequence of its sordid history, by what name did the field come to be called?  See Mat 27:8.  Why does Luke say that the name stuck?  See Act 1:19.  What does this teach us about how, even apart from the gospel, Jesus’ unjust death and Judas’ macabre end were memorialized by the people of Jerusalem in the naming of this field?  What is the significance that the traditional location of this field is adjacent to the valley of Hinnom, i.e., Gehenna?  See Mat 5:22,29-30 and NAS text note.

To whom does Matthew say that the field formerly belonged?  See Mat 27:7, and note that the traditional site of Hakeldama is also opposite the Potsherd Gate across the Hinnom valley (Jer 19:2) where excellent potter’s clay can be found.  Also observe from the photos that, as in many places throughout Israel, the field was not necessarily level as we think of fields, but on a hill with potential precipices, perhaps further explaining Luke’s description of Judas’ end.  What is the spiritual significance that the blood of Christ literally purchased a potter’s field that became a place where the broken vessels of strangers were buried?  Cf. Jdg 7:16-19, Psa 31:12, Lam 4:2, 2Co 4:6-12, Eph 2:12,19, Heb 11:13, 1Pe 2:11.  See also Gen 23:3-4, and observe that Christian graveyards have often been referred to as God’s fields, where He sows the choice seed of His people like grain for a harvest at the resurrection; cf. Hos 2:23, Joh 12:24-26, 1Co 15:20-23, 35-37. 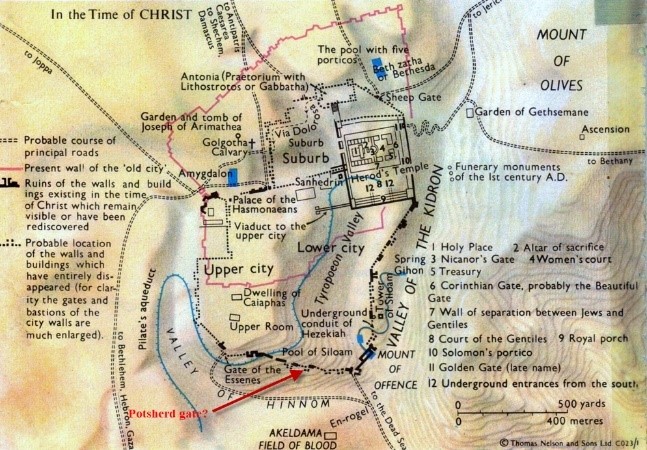