Having condemned Jesus to death at the break of day on Thursday morning of Passion Week, the Jewish leaders quickly led Him to the Roman governor to carry out their sentence before His disciples had time to find out what was happening and mount a protest.  Since their own Passover celebration would start that evening with a required sabbath rest on the first day of Unleavened Bread on Friday followed by the seventh day Sabbath on Saturday, it was essential for them that He be put to death immediately that day.  What does this remind us about the way God is able to orchestrate the events of history in order to accomplish His own will and purposes, exactly on time according to a schedule that only He knows, but that in hindsight is plain for all to see?  Cf. Dan 9:24-26, Mar 1:15, Joh 2:4, 7:6,30, 8:20, 12:23, 13:1, Act 1:7, Rom 5:6, Gal 4:4.

In order to not defile themselves so they could eat their Passover, the Jewish leaders would not enter into the Praetorium, so Pilate went out to them (Joh 18:28-29), where it appears that Jesus’ first trial before him took place.  With what accusations did they charge Him?  See Luk 23:2.  Whether it was His demeanor, or the way He answered, or perhaps because Pilate had previously heard positive things about Jesus, what did he discern almost immediately about their accusations?  See Luk 23:4; cf. Mat 27:18.  Understanding the importance of the Passover celebration to the Jewish nation over which he was ruling for his Roman superiors, and so especially at that time desiring to demonstrate to the Jewish leaders his own good will (cf. Mat 27:15), in what very difficult position was the Sanhedrin putting Pilate with their insistence that he put Jesus to death?  What does the difficulty Pilate found himself in remind us about the impossibilities those in the world often find themselves by trying to do what is right and to please men at the same time?  Cf. Gal 1:10.  How does Luke say that he tried to extricate himself from the situation?  See Luk 23:5-7.  What other motive might Pilate have also had for wanting to pass Jesus’ case off to Herod?  See Luk 23:12 and cf. Luk 13:1 for a potential cause of the enmity between the two.

If Jesus’ case was solely a matter of justice, what would the verdict of His trial before Pilate have been right then and there?  See again Luk 23:4.  What does his almost immediate conclusion, to which he clung throughout the rest of the proceedings, indicate about how weak the Jewish leaders’ case was against Jesus?  What does their vehement insistence (see Luk 23:5,23) that He be crucified in spite of their weak case that was putting both Pilate and themselves in a very awkward situation indicate about the extent to which they had hardened their hearts against God and His truth?  What does the fact that Pilate didn’t release Jesus teach us about there being a political element to justice in this world that is often more about pleasing people than doing what is right?  Should we imagine that apart from the gospel of Christ, even after two millennia, the world has now changed for the better and gives more than just lip service to true justice?  Cf. Joh 15:18-21.

Which Herod was it whose jurisdiction Jesus was from to whom Pilate sent Him?  See Luk 3:1 and note that it was this Herod, surnamed Antipas, who had John the Baptist put to death and imagined he had risen from the dead when he heard about Jesus’ miracles; see Mat 14:1-2 and cf. Luk 9:7-9, 13:31-33, Act 4:27.  How far from the Praetorium where Jesus was brought to Pilate was the palace where Pilate would have sent Jesus to stand before Herod?  Note that the traditional site of the Praetorium was at the Antonia Fortress adjacent to the northwest side of the temple, and Herod’s palace was on the western side of the city about a mile away; some place the praetorium adjacent to the palace itself, as in the map below (click on it to make it larger). 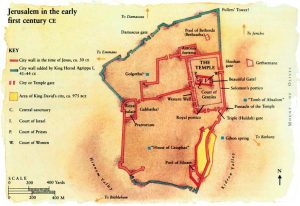 This was a magnificent palace built by Herod the Great, the father of Herod Antipas to whom Jesus was sent.  Josephus records that a much later procurator, Gessius Florus (64-66 a.d.), noted for antagonizing the Jews into the war with Rome that would destroy Jerusalem, took up his quarters at Herod’s Palace and had his tribunal in front of it.  Thus it is possible that Florus was following the lead of earlier procurators in appropriating for themselves Herod’s Palace, relegating Herod Antipas to another location such as the palace of the Hasmoneans a very short distance away (see ISBE).  But it is also possible that the appropriation of Herod’s Palace from the traditional site was part of his antagonization of the Jews.  Regardless, the distance from Pilate to Herod would have been less than a mile each way.