Before Jesus was crucified, the Scriptures record that He was mocked by the whole cohort of Roman soldiers in the Praetorium in regard to the charge against Him of claiming to be the Messiah, the king of the Jews.  And yet, by subjecting Himself to their scorn and the suffering of their taunts He demonstrated Himself to be more than a king, and in fact ever so much greater than even the most glorious king on earth to whom they supposed He could not begin to compare.  For the One they mocked was a King on an entirely different level of a very different realm whose glory is not measured in riches or power, but in the sacrificial love He demonstrated for any and all who would enter into His kingdom.  In this way the purple robe, the reed for a scepter, and the crown of thorns with which the world mocked Him were in His kingdom the identifying marks of glory that crowned Him the King of kings, and the Lord of lords; cf. Mat 5:10-12, 1Pe 4:14.  Are we as desirous of the unfading crown of glory in Christ’s kingdom that comes as a crown of thorns from this world, or have we only the faith to seek the passing glories of this age that fade as the flowers of the field?  Cf. Heb 11:24-26, Jam 5:3.

What does Matthew record happened after the soldiers had mocked Jesus, that from John’s gospel we understand happened after Pilate had made even further attempts to release Him (cf. Joh 19:1-16)?  See Mat 27:31.  Who does John say started out bearing the cross upon which Jesus was crucified?  See Joh 19:17, and note that it was customary for the Romans to force the condemned prisoner to carry his own cross; cf. Luk 14:27.  What does Matthew say happened on the way to the place of crucifixion?  See Mat 27:32.  Why would there have been a need to conscript another man to carry His cross?  Recall Mat 26:67, 27:26-30 and see also Mat 21:5 which indicates that Jesus could not have been a large man.  What does this bit of information communicate about the extent of Jesus’ physical strength at this point?  Although His physical strength was already nearly exhausted, is that what He needed to carry on to the cross, so that He perhaps rued spending the night praying in Gethsemane rather than sleeping?  Cf. the temptation to Jesus of Mat 26:53 and see Zec 4:6.  Although the consistent message of this world is exactly the opposite, what does this remind us is actually most important in the grand scheme of things: physical or spiritual strength, and what is its source?  See again Zec 4:6 as well as Mat 26:41, 2Co 12:9.

Who does Matthew say was pressed into service to carry Jesus’ cross that He was too physically weak to carry Himself?  See Mat 27:32, and note that Cyrene was an important ancient Greek city with a sizeable Jewish population located near the Mediterranean coast in the eastern part of modern day Libya. 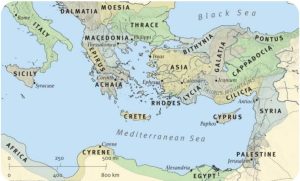 What else does Mark include about him?  See Mar 15:21.  Although Simon of Cyrene was probably unknown to his readers, what does Mark’s identification of him as the father of Alexander and Rufus indicate about how his sons may have been known to them?  Considering that Mark was known to be with Peter in Rome (1Pe 5:13) from where it is possible that Mark’s gospel came to us, is it also possible that the Rufus mentioned by Paul in his letter to the Romans is the same person?  Cf. Rom 16:13.  What spiritual impact might it have had upon Simon, and his whole family, to have been forced to take up the literal cross of Jesus and follow after Him (Luk 23:26) to Golgotha where he could not help but witness His crucifixion?  Especially as the spiritual significance of Jesus’ death became known through Peter’s preaching of the gospel on the day of Pentecost, at which Simon could also have been present (cf. Act 2:10), how might Simon have come to view that traumatic event as a most glorious privilege and blessing?  Cf. Gal 6:2.  Are we able to view the burdens we are forced to carry in service of the Savior as a similar privilege and blessing?

Who else does Luke say was following Jesus to Golgotha besides Simon who was forced to carry His cross?  See Luk 23:26-27.  Should we understand that the great multitude of the people that were following Him were primarily His supporters, or those whom the chief priests and elders had persuaded to ask Pilate to put Jesus to death (Mat 27:20-25)?  Recall that due to Jesus being arrested in the middle of the night and the speed with which He was brought to trial, it is unlikely that many of His followers would have even known what was happening.  It also seems clear that there were few if any of Jesus’ close supporters at His trial before Pilate to stand up for Him as the crowd was easily turned against Him by the chief priests.  Similarly, should we understand that the women Luke mentions who were following Jesus to the cross mourning and lamenting Him were those mentioned later by him as standing at a distance who had accompanied Him from Galilee, including Mary Magdalene, another Mary who was the mother of James and Joseph and perhaps the wife of Clopas (Joh 19:25), and Salome, who was likely the mother of James and John (compare Mat 27:55-56 and Mar 15:40)?  Or rather, is it more likely that these were “professional” mourners who served in a somewhat official role to mourn the death of any Jewish person?  Cf. 2Ch 35:25, Jer 9:17-18, Amo 5:16, Mar 5:38.  Notice also how Jesus addresses them in Luk 23:28 and think: were the women who followed Jesus from Galilee “daughters of Jerusalem”?  How does this help us to better understand Jesus’ words to them in Luk 23:28-31?  Think: would Jesus’ supporters even be found in Jerusalem when it was destroyed, that they should mourn for themselves?  See Mat 24:15-19, on the basis of which the Christians had fled Jerusalem when they saw the signs Jesus had given.