After a total of six inquisitions and trials, the desire of the Jewish leaders to put Jesus to death was finally granted and he was led to crucifixion in the late morning on Thursday of Passion week.  Already weakened by the scourging and beatings He had endured, He was unable to carry His own cross very far and so a man known as Simon of Cyrene was conscripted to carry it for Him, who likely became a witness in the early Church of Jesus’ crucifixion, along with his sons Rufus and Alexander.  Also following Him was a “great multitude” of those who were incited by the chief priests to demand that Pilate put Him to death, along with some women of Jerusalem whose role was to mourn and lament those consigned to death.  Jesus told these not to mourn for Him, but for themselves and their children, knowing that His sufferings for righteousness’ sake were but for a moment, and the much greater sufferings that would consume them in judgment for the nation’s sins; cf. Luk 23:26-31.

Who else does Luke say was in the caravan of people to the crucifixion?  See Luk 23:32; cf. Mat 27:38.  How does Luke describe them in this verse, in contrast to what we understand about Jesus?  What is the significance that He was crucified between them?  Hint: how would those in the throng of people have viewed Jesus in relation to these two?  Cf. Isa 53:12.  What does this remind us about the way that those of the world ultimately come to view those of God’s kingdom, so there can be no partnership between them, but must remain separate, because in time they must indeed be separated as the wheat from the chaff?  Cf. 2Co 6:14-17, Mat 3:12.  How does this help us to better understand why His supporters, and especially His disciples, were most likely not among those following Him in this march to the crucifixion?  Cf. Luk 22:37, as well as the discomfort Peter experienced just hours earlier in the courtyard of the High Priest’s palace that led to his denials; think too: how would they be viewed now that Jesus had been found guilty and was on His way to be crucified as a malefactor?  Cf. 2Ti 1:7-8,12, 2:3,9 for the similar fear that Timothy would have faced as Paul too came to be branded as a criminal and was awaiting execution.  What does Luke say that describes the fear that His acquaintances would have been feeling when they did find out and had made their way to the crucifixion?  See Luk 23:49.  Even then, who alone of the disciples is mentioned as being at the crucifixion?  See Joh 19:26, and consider that since John lived almost into the next century, he must have been youthful, if not still a youth, so that like the women he would not have been deemed the same threat as men in their prime.  Consider then how such danger, and its accompanying fear, would have especially affected the men, leaving mostly only the women who supported Him to be found at His crucifixion, and then on Sunday morning when they discovered the empty tomb.  What does this remind us about the importance of the different role that women fulfill in life that at times allows them to minister in circumstances and ways that men aren’t able?

Where does Matthew say that they led Jesus to crucify Him?  See Mat 27:33.  While the Hebrew name was Golgotha, which means Place of a Skull, what is that same name in Latin, not found in our modern translations, and only in Luk 23:33 in the KJV, by which it is often referred to by Christians today[1]?  What does the fact that Luke there simply refers to the place with its Greek name indicate about his different audience that was mostly Gentiles, not Jews?  Why might the place have been called The Skull?  Notice that while it is possible that it obtained its name from it having become a place of execution, it is also possible that the location was already a public charnel house, a place for keeping human bones, designated as such to avoid ceremonial defilement.  In what way would both the desire to contain the defilement associated with death and the general sentiment of criminals getting their just rewards have made such a location a good place for executions to occur?  Why also would such a location with its visible reminders of death’s victory over mankind have been the perfect location for God’s final victory of life over death?  Cf. 1Co 15:55-57. 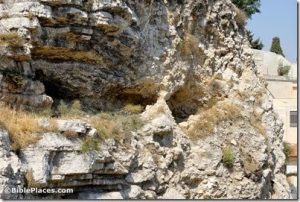 Notice too that in the late 1800s a location for Golgotha different from the traditional Church of the Holy Sepulcher was proposed based upon its appearance resembling a skull.  Referred to as Gordon’s Calvary, after its most ardent proponent, it is situated near the Garden Tomb, which due to its more natural and peaceful atmosphere, is often revered by protestants as the location of Christ’s death and burial. 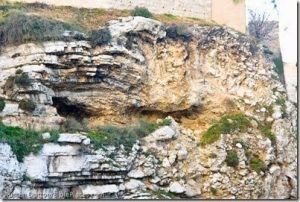 However, the tomb seems to date to a time centuries before the time of Christ, and it is doubtful that the topography of the hill would have resembled the imaginative skull that is now seen.  Notice how in 2015 the nose of “the skull” had eroded away, compared to the earlier picture from 2008.

[1] Calvary, from the Latin Calvarius. 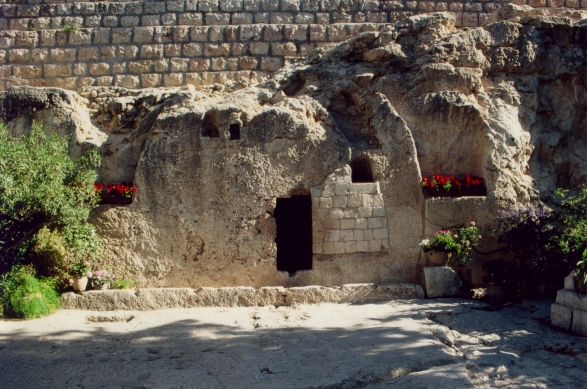 The Garden Tomb, near Gordon’s Calvary.