Immediately following the feeding of the 5000 what does Matthew say Jesus did in regard to His disciples and in regard to the multitude?  See Mat 14:22.  Observe the strong language: why did He “make” or “compel” (see NASB text note, lit. “force”; cf. Act 26:11, 28:19 for the same Greek word) the disciples to get into the boat and go ahead of Him to the other side of the lake?  Hint: What was the response to His miraculous feeding of them all by the multitude that had followed Jesus to the secluded area to hear Him teach?  See Joh 6:14; cf. Deut 18:15-18.  In light of their perception of who He was because of the miraculous sign He had just performed, what were they intending to do?  See Joh 6:15.  What danger to His greater mission and purpose did this pose?  Why would the presence of His disciples who were even more acquainted with His miraculous powers have added to that danger?  Think: had they yet come to fully understand the nature of His kingdom and the purpose of His coming?  What temptation would it have been for Jesus to have His own disciples and a great multitude clamoring for Him to be king?  Cf. Mat 4:8-9.  How was His reaction radically different from what the reaction of most religious leaders today would have been?  Indeed, after separating Himself from His disciples by sending them ahead of Him with the boat and dismissing the crowd, what did He do?  See Mat 14:23, Mar 6:46.  What does His example teach us we must likewise do when sorely tempted?  Cf. Mat 26:41, Luk 22:40,46. 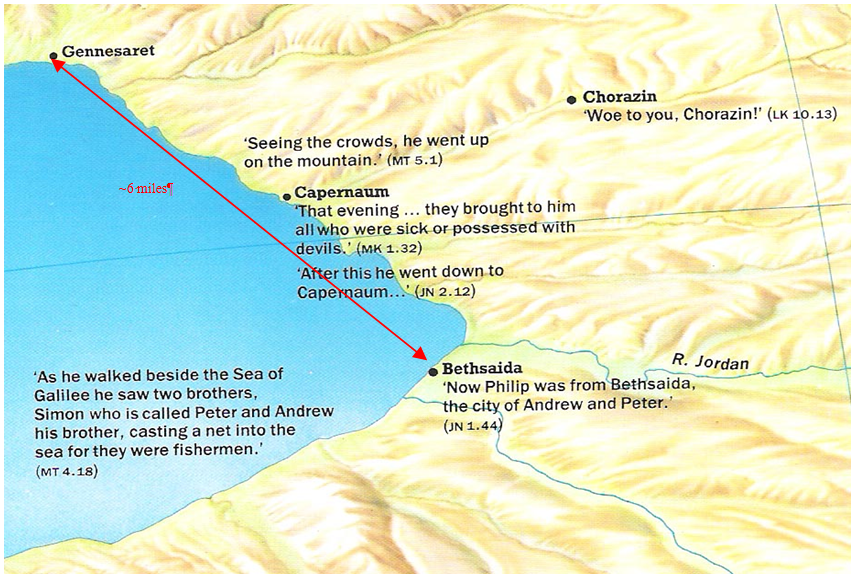 Where specifically does John say that the disciples in the boat were heading?  See Joh 6:17.  Where does Mark say specifically they were heading?  See Mar 6:45.  How are we to reconcile this seeming contradiction?  Note: Observe that the Jordan river formed the border between the Tetrarch Philip’s kingdom and Herod Antipas’ Tetrarchy of Galilee.  John notes that the disciple Philip was from “Bethsaida of Galilee” (Joh 12:21), indicating a Bethsaida on the other side of the Jordan in Galilee to be distinguished from the Bethsaida Luke referred to (Luk 9:10) in the Tetrarch Philip’s kingdom on the eastern shore of the lake near where the feeding of the 5000 took place, which Philip enlarged and called Julias after the emperor’s daughter.  John also notes that the Bethsaida of Galilee where Philip was from was also “the city of Andrew and Peter” (Joh 1:44).  It must have been quite close to Capernaum as Mark records that “immediately after they had come out of the synagogue” in Capernaum (Mar 1:21) “they came into the house of Simon and Andrew” (Mar 1:29), making it unlikely they were from the Bethsaida on the other side of the Jordan.  “Bethsaida” also means “house of fish”, and so it would have been a popular name for a location along the lake, especially on either side of where the political boundary of the nutrient rich waters of the Jordan emptied into it.  Observe also that while “probable” locations of many sites mentioned in Scripture have been set forth on Bible maps, exact identification is often uncertain and has not been entirely established.

Where does Scripture record that the disciples in fact came to land on the other side of the sea from where Jesus fed the 5000?  See Mat 14:34, Mar 6:53.  Locate Gennesaret on a Bible map in relation to the area of Bethsaida-Julias where Jesus fed the 5000 and Capernaum, and observe that a Bethsaida of Galilee near Capernaum would have been located in the same general direction as Capernaum from Bethsaida-Julias.  How far would it have been from the area of Bethsaida across the sea to Gennesaret?

What was the experience of the disciples in the boat?  I.e., what happened that made their journey to the other side of the lake an ordeal?  See Joh 6:18, Mat 14:24.  What time of day was it?  See Mat 14:25.  When was the “fourth watch of the night”?  See NASB text note (3-6 AM).  What does this indicate about how long Jesus had spent praying?  How far were they from Jesus?  See Joh 6:19.  Does this fit Mark’s description of where they were in Mar 6:47?  Read Mar 6:48a; how would Jesus have been able to see them straining at the oars from such a distance when it was still night?  Hint: recall that “the Passover…was at hand” (Joh 6:4) which occurred on the 14th day of the first month of the Jews’ lunar calendar, and so it would have been a full moon.  Considering how far they had rowed, how far would Jesus have therefore walked upon the water, and what does this indicate about the extent of this miracle?